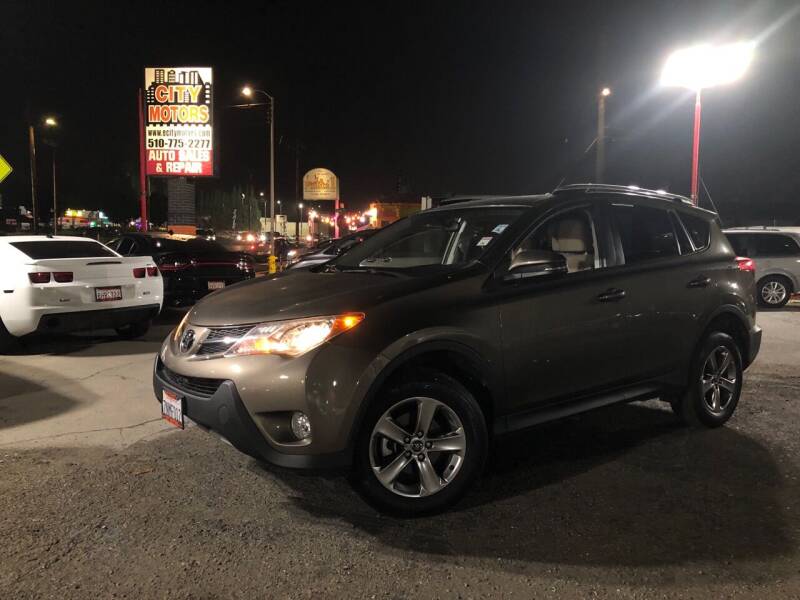 HARD TO FIND!!! LOCAL OWNER!!! ONLY 75,900 MILES!!! LOADED!!! BACK UP CAMERA!!! MOON ROOF!!! BLUE TOOTH WIRELESS!!! ALLOY WHEELS!!! AND MORE!!! PLEASE HURRY!!! WILL NOT LAST LONG!!! With their up-for-anything personality, easy-to-park size and sensible appetite for fuel, compact crossovers are some of the most popular vehicles on the road. Versatility is their greatest asset, as you can easily fill them with car seats, groceries, sports equipment or the latest spoils from an antiquing trip and be on your merry way. Among these practical SUVs, the Toyota RAV4 has long been a favorite of savvy shoppers of all ages and tastes. Thanks to increasingly more competent rivals, the 2015 Toyota RAV4 isn't quite the no-brainer pick anymore. Still, you'll likely find that it checks off most of the boxes on your ''must-have'' list. The ''compact'' classification is almost unjust, given the Toyota RAV4's roomy passenger and cargo compartments. The latter is especially noteworthy not only for its capacity (which at 73.3 cubic feet is among the most generous in its class) but its laudable usability. Whether you're loading it up with a couple of dogs or a couple of bags of heavy top soil, you'll appreciate the cargo bay's low load floor and, on upper trims, the availability of an adjustable-height power liftgate. A pleasant demeanor on the road makes the RAV4 especially likable. In particular, good outward visibility, a composed attitude around corners and a smooth, quiet ride are character traits anybody can appreciate. But unlike most competitors, this Toyota offers just one engine choice. There's no engine upgrade if you'd like more oomph than the average performance. Also, the RAV4's fuel economy numbers are good, but not class-leading. Given the quality of the competition in the small crossover class, it's worth checking out a few alternatives. When it comes to all-around versatility, the 2015 Honda CR-V dominates the class thanks to its roomy cabin, abundance of storage compartments, strong fuel economy and quiet, comfortable ride. Those who truly enjoy driving should consider the engaging and athletic 2015 Mazda CX-5, though its interior isn't quite as functional as the others. There's also the well-regarded 2015 Ford Escape, which boasts a choice of three engines and a well-trimmed cabin. Finally, if you plan on taking any off-road excursions, the 2015 Jeep Cherokee is tops in that area, and it's also one of the few models available with a V6 engine. All things considered, the 2015 Toyota RAV4 is not overwhelmingly strong in any one area, but it shines as a solid, well-rounded entry in a very competitive segment. As such, the RAV4 should easily meet the needs of most shoppers.