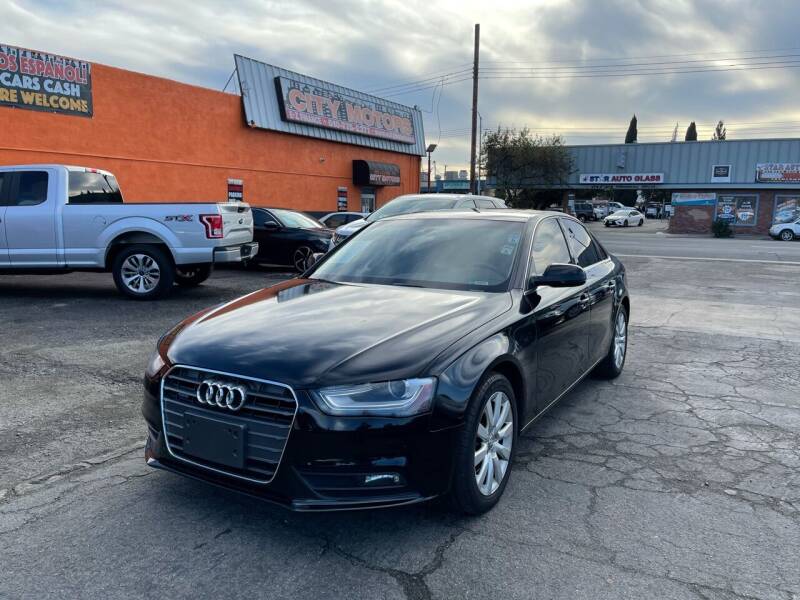 AWD!!! HARD TO FIND!!! LOCAL OWNER TRADED IN!!! ONLY 108,900 MILES!!! LOADED!!! LEATHER SEATS!!! HEATED SEATS!!! POWER SEATS!!! ALLOY WHEELS!!! BLUETOOTH WIRELESS!!! AND MORE!!! PLEASE HURRY!!! WILL NOT LAST LONG!!! The 2013 Audi A4 and S4, last redesigned for 2009, have been freshened on the outside and refined on the inside. Mechanically, the only significant change to the standard model is that it now has electric power steering, a year or two behind many other carmakers. Possibly the biggest change is what isn't here: the A4 Avant wagon is discontinued, replaced by an all-new allroad model for 2013. The Audi A4 is a premium compact sedan with a brilliant venerable 2.0-liter turbocharged engine, smooth ride, and classy interior, including standard leather upholstery, automatic climate control, and available features found on larger luxury cars. Front-wheel drive with a CVT transmission is standard, while quattro all-wheel-drive with a Tiptronic 8-speed automatic transmission is available. 2013 Audi A4 competitors include the BMW 3 Series, Mercedes-Benz C-Class, Lexus IS, Acura ILX, Infiniti G, Cadillac ATS, Buick Regal and Hyundai Sonata. The S4 occupies something of a niche, as many of its competitors are either dated or more expensive. The A4 does well against its competition in the areas of fuel economy and passenger room, and is superior in all-weather capability. The 2013 A4 and S4 get a streamlined version of the MMI Navigation system and controls, reducing the number of buttons from eight to four, and the three-zone climate control system has been slightly simplified. The A4 styling is clean but not dynamic. The 2013 A4 gets a new grille that's more angled in the upper corners, dynamic new hood lines, new bumpers with angular air inlets, and sleek headlamps with LED daytime running lights. Optional lighting includes halogen cornering lamps added to the adaptive system, and LED taillights. New wheel designs, from 17 to 19 inches, are also available

Unless prohibited by applicable rules or regulations.